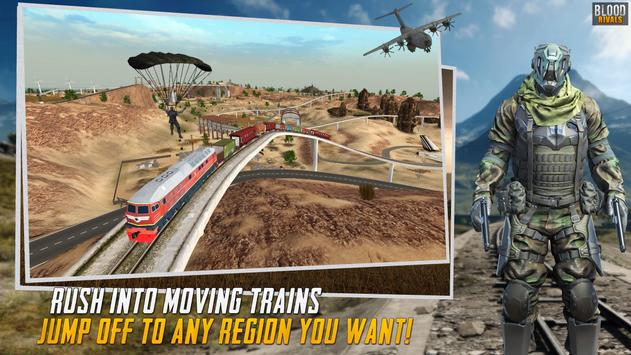 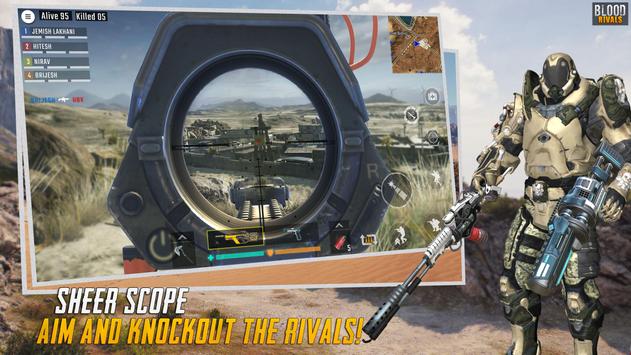 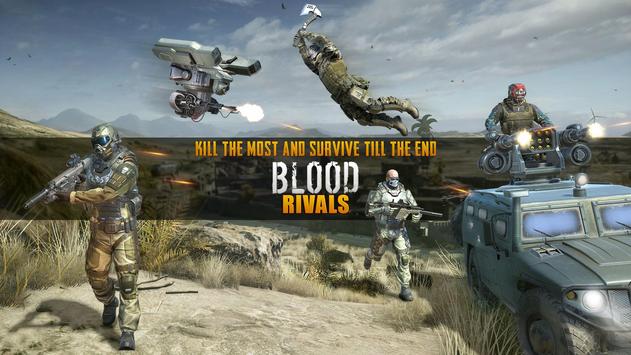 Shoot, Survive and be the ultimate FATHER!!

Blood Rivals is extreme survival shooter on the mobile. Land on the battleground of war, load up the gun, aim your target, and start shooting like ultimate commando. Compete against many rivalry players with 3 chances on the front line of the action battlefields.
ill the most and survive till end to become THE FATHER. Follow the rules of surviving and all your specialized tactics to build up the best action multiplayer strategy game of the year.

HIGHEND IMMERSIVE ACTION GAMEPLAY
Realistic gameplay with rich detail creating eye opening visual experience.
Feel like youre in the thick of the action battleground as you play with highquality audio and exclusive gunfire sound.
Fully Customizable UI with best First person shooter experience in one of the top action games.
Modern controls with unbelieveable 3D graphics, devastating battleground and spectacular locations of the top gun games.
Engrossing unique experience on mobile with availability in both online and offline mode, like the most top free shooting games.
Blood Rivals is designed with perfect shot system and incredible offers and bonuses of the free action games.

EXPLORE IN STYLE
Rush into flaunting high speed trains and escape off to safe zone of FPS shooting games.
Commandeer a variety of vehicles like trucks, cars to hunt down your rivals.
Make a swift escape to survive from devastating tornado storm and firing turrets of shooting games.
Boost yourself with power raiser including high jump, dynamic weaponry, acoustic armor and enemy detector.
Duty to race against time, exploding barrels, cars on the war battlefield of Blood Rivals.

DEADLY WEAPONRY AND FAIR ENVIRONMENTS
Load up on modern weaponry like Sniper rifles, shotguns, machine guns or pistols gives each player a distinct experience in battleground survival games.
Challenge your friends around the world into best FPS games combat.
Unlike all the top free gun games, get amaze by the highly advance aiming skills of the action games.
Defeat intruders in Team Deathmatch mode up to 12 multiplayer opponents in modern gun games.
Create your private room and team up with your friends worldwide in free battleground shooting game.

PVP MULTIPLAYER WAR SURVIVAL CHALLENGE
Varied AI behavior makes each player unique and challenging to follow the rules of surviving and take war games to victory.
Command your friends to victory and be the FATHER with exciting rewards of Blood Rivals.
Build your army defense on battlefield for survival and battle against global players worldwide.
The more you win, the better you play upgrade and engage in harder, faster challenges that will send you flying up on the leader board!

Get ready to land, loot, and do whatever it takes to survive and be the last man standing!
The real action of the year, fall into this innovative new game and break the standards of common battleground survival shooting games.
It is full of action adventure on the hopeless land for modern warfare of strike. Either you are true fan of gun games, survival games, or fighting to be a hit man in the arena mode, then this is one of the epic Battle Royale Games. It is free FPS action multiplayer shooting games that you don't want to miss.
Blood Rivals Survival Battleground FPS Shooter Game has been tested by our team against viruses, spyware, adware, trojan, backdoors and was found to be 100% clean. We will recheck Blood Rivals Survival Battleground FPS Shooter when updated to assure that it remains clean.