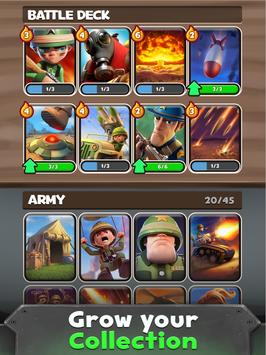 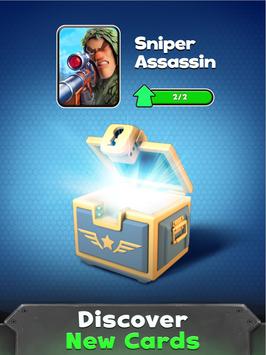 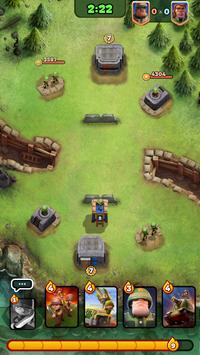 Battle players from all around the world in this free, multiplayer action game!

Discover, collect and upgrade 25+ cards with different troops and weapons, from the destructive fighter aircraft to the treacherous landmines!

Define your strategy and choose the 8 cards that you will use in the combat. Your decision will make the difference between victory and defeat in this clash!

Game Features:
Real time strategy: no more boring turn by turn battles
25+ different cards: fearsome troops, weapons and gun turrets
Upgrade your troops to make them more effective in combat
Clash against your opponents and climb to the top of the rankings
Pick the best general to lead your troops to victory in this war
Have the best army: soldiers, snipers, tanks...
Player vs Player combat online (pvp)
Play in 5+ fun arenas: each with its unique layout
Are your ready for the battle and adventure?

Get your army ready and start the action! Play now for free this multiplayer card game! And may the best general win the war! Play it with your friends and have fun as if you were kids, boys and girls.
War Heroes: Strategy Card Game for Free Game has been tested by our team against viruses, spyware, adware, trojan, backdoors and was found to be 100% clean. We will recheck War Heroes: Strategy Card Game for Free when updated to assure that it remains clean.