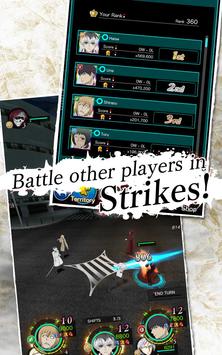 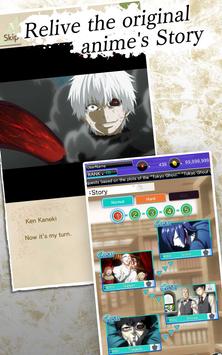 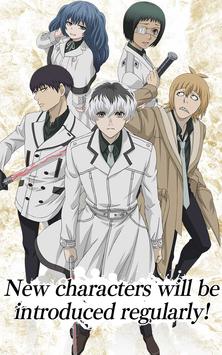 The massively popular anime series "Tokyo Ghoul" has been made into a smartphone game!
Create teams of your favorite characters and join the battle of "Ghoul" vs. "Human"!

Beautiful anime visuals that combine 2D illustrations with 3D models!
2D illustrative portraits have been specially drawn for this game!
Moving 3D models take over in battle, with voiceovers and illustrations appearing when you use skills!

6person tapcombo battle system!
Choose from over 100 characters and form a team of 6 split with 3 in the front line and 3 in the rear!
Deal consecutive attacks using skills and character switches to achieve combos!

Indepth levelling system!
Power up your characters and upgrade their kagune and quinque to get special abilities!
Gather items to upgrade your weapons and strengthen your characters!

Battle other players in "Strike"!
Defeat the enemy team and get ranking rewards!

Fight powerful enemies in the extreme battle, "Raid"!
Face tough enemies such as Rate SS Ghouls and Special Class Investigators!
TOYO GHOUL [:re birth] Game has been tested by our team against viruses, spyware, adware, trojan, backdoors and was found to be 100% clean. We will recheck TOYO GHOUL [:re birth] when updated to assure that it remains clean.