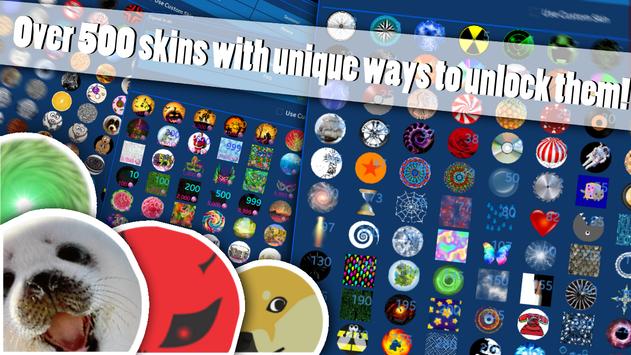 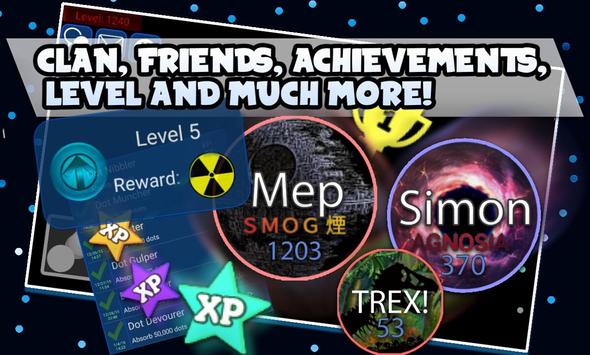 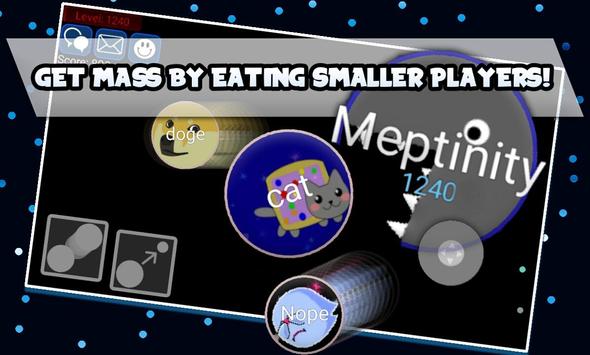 Grow your blobs by collecting dots placed throughout the game or gobbling up smaller players. Avoid bigger players attempting to do the same. Compete with other players to become the biggest blob.
Features:
Find Groups, Play With Friends, and Join a Clan!
Over 500 skins with unique ways to unlock them!
NEW: Super competitive Tournament Mode! Compete for massive plasma rewards!
NEW: Upload your own custom skin for other players to see!
Online Multiplayer (up to 27 players per game)
Offline Singleplayer
New Battle Royale (Duo) Mode!!
FFA, Timed FFA, FFA ULTRA, FFA Classic, Teams, Timed Teams, Capture the Flag, Survival, Soccer and Domination Modes!
Mayhem Mode!
XP, Achievements, and Stats!
Clan System with Clan Wars!
If you are feeling competitive try the Arenas!
Space or Grid Theme
Multiple Control Schemes
Server Leader Boards
No Internet? No Problem! Play with nearby friends via Bluetooth
Controls:
Touch the control pad to move
Split Button launches some of your mass in the direction you are moving
Eject Button ejects some of your mass in your current direction. Tip: Use this to move black holes!
Tips:
Eject mass into a black hole to move it
After some time passes your blobs will recombine
Seek refuge from large players inside black holes if you are small
Black holes will break up or shrink your blobs if you are large
Split up when being chased for a small speed boost
Multiplayer Connection Tips:
For multiplayer you need at least a 3G cellular connection or high quality WiFi
Select the nearest server
Try several different internet connections (if available)
Close applications in the background that might use the internet or slow down your device
New features and improvements coming soon.
Nebulous.io Game has been tested by our team against viruses, spyware, adware, trojan, backdoors and was found to be 100% clean. We will recheck Nebulous.io when updated to assure that it remains clean.

Please review Nebulous.io Game and submit your comments below. We will collect all comments in an effort to determine whether the Nebulous.io app is reliable, perform as expected and deliver the promised features and functionalities.